Home / Visitors / Visitor Attractions / Shadows of the Past / The Tasmanian Tiger 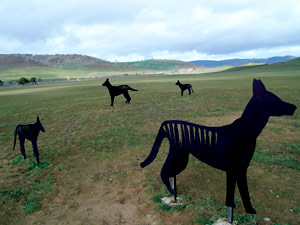 In colonial times, Van Diemen’s Land was the last stronghold of an animal known as a wolf, hyena, Tasmanian tiger or thylacine. Long since vanished from the mainland where only rock art drawings of it remain, the thylacine was hunted to the brink of extinction in Tasmania during the nineteenth century. It was blamed for the deaths of many sheep and lambs, but the real culprits were often wild dogs and hungry convict shepherds.

The thylacine – a distinctive striped animal with a long tail and pronounced snout – vanished from the mainland a long time ago – around the time that the dingo arrived in Australia some 3,500 years ago. The more agile dingo competed with the thylacine for food and eventually the dingo-free island of Tasmania became the thylacines’ last haven.

The Europeans who came to Van Diemen’s Land [Tasmania] at the start of the nineteenth century came with dogs. Once again thylacine numbers began to drop dramatically as the slower creature was no match for the canine competitor.

As settlers began to clear more and more land for farming and grazing, the open forests preferred by thylacines started to vanish. The grassy plains that were once the habitat of these unusual animals were taken over by farms, and towns began to appear.

Thylacines co-existed with Tasmanian Aboriginal people for thousands of years. Europeans, however feared these carnivorous marsupials and through a deliberate policy of extermination brought this unique creature to the brink of extinction.

Thylacines were often blamed for the death of poultry and livestock. They were hunted down increasingly when bounties were offered for their scalps. Such schemes operated between 1830 and 1909, some run by the government and others by local groups. Wild dogs, rather than thylacines, were often the real culprits in the destruction of domestic animals. Shepherds also often falsely accused the thylacine of the slaughter of lambs that they could not account for, when in fact these lambs had provided the poorly paid human watchers with substantial meals.

Ironically, the thylacine finally became ‘totally protected’ under Tasmanian Government legislation on 10 July 1936, just two months before the last thylacine in captivity died at Beaumaris Zoo in Hobart. The thylacine is now presumed to be extinct, although there have been a number of alleged sightings in remote areas of Tasmania over the years. As recently as 1994, an Oatlands’ resident reported startling a large striped animal with a heavy tail in some light bush. He saw it hop a number of times before it took off. When he described the animal to a zoologist, the expert suggested that it might have been a thylacine. Thylacines are known to have occasionally hopped on their hind legs when surprised, before dropping down on all fours and running off.

Despite having vanished for all intents and purposes from the island state, the thylacine continues to be highly visible as an icon. Its image is used to promote a wide range of products and services, from tourism to locally produced beer.