Home / Visitors / Visitor Attractions / Shadows of the Past / Shepherd, his flock & dog 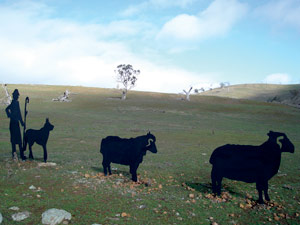 This shepherd was a convict and some of these sheep belong to him. Contrary to the usual image of convicts in chains, in 1817 about half of all the sheep in Van Diemen’s Land were owned by convicts or emancipists and these men and women were able to wander across the open grassy woodlands in comparative freedom. Landowners often gave their convict shepherds some of the new season’s lambs as an incentive to protect the flock from predators and thieves.

Sheep were very important to the early colony of Van Diemen’s Land and continue to be significant today, particularly in the Midlands. The Europeans brought thirty-two sheep to the colony in 1803. Two years later there were more than seven hundred. These were bred for meat rather than wool. Tough breeds and a reasonable climate made sheep profitable for early farmers.

Because there were so few natural predators, sheep were generally allowed to roam free. This avoided the problems of disease usually associated with having to put sheep in yards at night. Instead, a shepherd with his dog might be left in charge of the flock while the landowner himself resided in town.

Convicts were the primary source of labour in the early years of white settlement and this gave them some power. Landowners often agreed to give their assigned convicts one third of the natural increase in the flock they were caring for as an incentive for them to protect the flock from predators and thieves. Conversely, although less often, a ticket of leave man might run sheep on the landowner's property in return for payment of one third of the lambs.

The ‘thirds system’ was eventually outlawed, as it put too many sheep into the hands of the labouring classes. Widespread ownership of stock made it easier to 'launder' sheep, and made almost impossible the task of finding the culprits behind often large-scale sheep stealing operations.

Wool production was not undertaken seriously in Van Diemen’s Land until 1820 when John Macarthur sent merinos from New South Wales to Hobart Town. The one hundred and eighty-one fine wool sheep that survived the journey were sold for seven guineas each, and pioneered the wool industry that became increasingly important to the colony’s economy.

Growing sheep for wool required a more controlled form of husbandry than the somewhat indifferent requirements of the tougher meat varieties. This control and expansion of the industry exacerbated conflicts with Aboriginal people over land use. By the early 1830s Aboriginal peoples had been removed from the grassy woodlands that millennia of their careful use of fire had created, and sheep farmers in Van Diemen’s Land were exporting large quantities of fine wool back to Britain, even outstripping New South Wales. Given the almost ideal conditions created by Aboriginal land management practices, the wool industry prospered well beyond the wildest expectations of the early settlers.