The surveyor and his chain man, South of Oatlands

He who names claims! 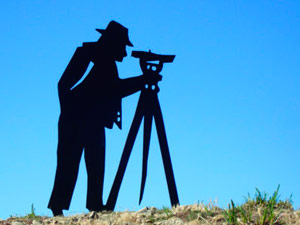 My job was to map the landscape so that the best routes from one place to another could be found and to ensure that land is accurately measured to prevent disputes. I walked the hills and valleys with my chain man, taking readings with my theodolite and mapping the contours. My job was to turn the track between Hobart Town and Launceston into a road capable of accommodating the increasing coach traffic that was generated as the settlers established their farms and businesses from one end of the island to the other.

As you travel the Heritage Highway today you are tracing my work, and also ancient Aboriginal routes that I often followed.

Mapping and naming the land is part of the process of ownership. Surveyors determined sites for settlements, routes for roads and marked out land grants. Their surveyor’s equipment - the theodolite, chain and staff - enabled accurate geometric calculations of the angles of elevation. The surveyor operated the theodolite, a kind of telescope, and the chain-man carried a chain made of links of a particular length that measured the horizontal distance, and held the staff that helped to determine the elevation. This enabled the surveyor to measure the height of hills and contours of the land very accurately and to determine the best route for building roads and bridges.

The theodolite was invented for the Ordnance Survey, Great Britain's national mapping agency established in 1791. The name reflects the original military purpose of the organisation in mapping Britain during the Napoleonic Wars when there was a threat of invasion from France. The Ordnance Survey is widely regarded as the most systematic and thorough mapping institution in the world, detailing every corner of Britain long before satellite technology made quality maps of the same standard available elsewhere in the world.

By the late 1820s, so many newcomers had flocked to Van Diemen’s Land that the main road between Hobart Town and Launceston was crowded with coaches, carts, horsemen and people on foot. In 1827, these passers-by could have paused to watch surveyor William Sharland at work. Dissatisfied with the state of the road, Lieutenant-Governor George Arthur had instructed Sharland to find ways to reduce some of the steep gradients and to shorten the route. Sharland was responsible for the design of St Peter’s Pass, a cutting through the steep hills in the south of the Midlands - no doubt a tough job for the convicts on the road gangs.

William Stanley Sharland was appointed to the Legislative Council after Tasmania achieved self-government. Sharland represented New Norfolk in the House of Assembly from 1861 to 1872.

Following his 1827 survey of the main road between Hobart Town and Launceston, Sharland’s recommendation to create what is now called St Peter’s Pass was immediately put into effect. However, his other suggestions such as bypassing Epping Forest sparked lengthy debate and were never carried out.

Like many of the colonial surveyors, Sharland was one of Van Diemen’s Land’s early explorers, and was credited with having ‘discovered’ Lake St. Clair. In 1832, he explored the areas around the sources of the Derwent, Gordon, and King Rivers, a trip that took him to the far reaches of the island’s ‘wild west’ coast.

Sharland’s successful career as a surveyor began shortly after his migration to Van Diemen’s Land in 1823. As well as for his contribution to surveying the road between Hobart Town and Launceston, he is remembered for his involvement in planning the layout of towns including Oatlands, New Norfolk, and Bothwell.

The year after Van Diemen’s Land became Tasmania with the granting of self-government in 1856, Sharland entered politics, initially as a member of the Legislative Council and then as the representative for New Norfolk in the House of Assembly for eleven years from 1861. He was a substantial landholder at New Norfolk with interests in sheep and hop growing.

Sharland died in Hobart Town at his residence in Davey Street on 23 October 1877 aged in his late seventies. He was remembered as being ‘naturally of a very quiet and unobtrusive disposition’. His obituary recorded that Sharland ‘lived a long and busy life, and has passed away amid the mournings of a very large circle of friends and the general regret of the poor, to whom for half a century he was a considerate friend’.