Home / Visitors / Visitor Attractions / Shadows of the Past / Emus

Tasty, flightless and far too curious for its own good! 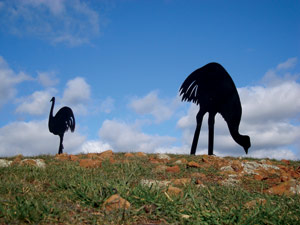 Did you know that a Tasmanian species of emu ran wild across the island until the mid-1800s? It was smaller than its larger mainland relative, but probably just as inquisitive. Aboriginal women gathered emu eggs. Aboriginal men trapped and hunted these flightless birds with spears. They probably also tricked the nosy creatures with bunches of feathers tied onto sticks. Once close enough to a concealed hunter, a noose was slipped around the emu’s neck. One emu made a good-sized meal.

Early settlers, too, feasted on the bird - so much so that the Tasmanian emu has been eaten into extinction.

The Tasmanian emu is extinct. Exactly when this happened we can not say for sure because its larger mainland cousin was introduced onto the island by early European settlers. Suffice to say, neither creature grazes free on the Tasmanian grasslands today.

Tasmanian emus thrived in the open ‘park land’ of the Midlands. Fleet of foot, they could outrun most predators. However, the emu was also a curious bird, and what they say about the cat could also apply here. Like Aboriginal hunters on the Australian mainland who lure emus with feathers

tied to the ends of sticks, Tasmanian Aborigines probably employed similar subterfuge. Once the birds are within range of the hidden hunter they can be caught in a noose. Tasmanian Aborigines certainly used decoys to catch ducks. Whether traps, spear hunting skills or trickery were used, there is certainly evidence of both the bird and its eggs being eaten. Aboriginal men undertook the hunting and women collected the eggs.

Early European settlers in Van Diemen’s Land enjoyed the bounty that this island had to offer. Emu, kangaroo and wild duck were easy prey to a hunter with his efficient killer companion – the hunting dog. Twenty years of intense hunting meant that by the 1830s the ‘empty lands’ of the north-east, where Aboriginal peoples had retreated, were the only area in which Tasmanian emus still grazed. As the incoming ‘settlers’ exploited this land intensively it was not long before there were only a few emus left.

By the middle of the 1800s, the few known Tasmanian emus were in captivity. Two roamed in the grounds of Mona Vale, William Kermode’s estate in the Midlands near Ross. It is recorded that Mr Dyer, an unfortunate guest from Hobart Town, was knocked to the ground and trampled on by one of these strange and curious creatures. His embarrassed host rushed to his rescue.

As an old man Mr Ransom of Killymoon in the Fingal district of northern Tasmania, recalled hunting Tasmanian emus around 1840 when he was eighteen. He remembered some Tasmanian emu eggs being taken and successfully bred using a turkey hen as surrogate mother. However, when birds from this breeding program drowned trying to cross a flooded river in 1873, the last known example of the species was gone.

Ask most Tasmanians and you will find that they never knew the Tasmanian emu ever existed. The only remaining complete specimens can be found at the British Natural History Museum in London.