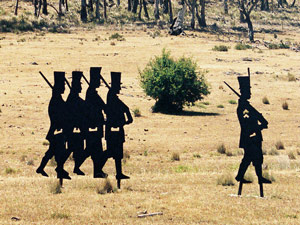 Van Diemen’s Land was first and foremost a British military outpost. Soldiers accompanied the convicts on the transport ships, supervised the rationing of supplies, and guarded the chain gangs – as well as watching out for the French! Most didn’t stay long. There were other British interests around the world to defend. Many of the convicts they guarded had also been soldiers, but were reduced to committing crime once the wars they were fighting ended and they were out of a job.

By the beginning of the 1820s, most of the suitable farming land around the main centres in the north (Launceston) and the south (Hobart Town) had been ‘settled’. The land in between was to become highly sought after as colonial policy changed: a ‘landed gentry’ began to build estates on the Aboriginal lands in the Midlands plains. How did this come about?

In 1821 Commissioner John Bigge came on an inspection tour of the island on behalf of the British Government. He recommended that the Crown introduce a deliberate policy to create an upper class of wealthy landowners who would be empowered to maintain order. The ensuing land grant system granted suitable farming land, and assigned convict servants, to free men in proportion to their assets. This would fuel further growth in the European population of the Midlands.

In that year Governor Macquarie considered that a military outpost was needed to protect the growing number of European settlers from bushrangers, and from the Aboriginal peoples who were protesting their presence. There was concern for the road through the Midlands plains, which was becoming an important colonial transport artery; its security was considered central to the economy of the colony.

After 1825, when Van Diemen’s Land became a colony in its own right, Lieutenant-Governor Arthur set about establishing the military outpost of Oatlands. Soldiers were initially involved in supervising the building of roads and other infrastructure until the Field Police was established by Arthur in 1827. The military was also engaged in organising the most significant campaign of the time, the infamous ‘Black Line’.

During the 1820s, confrontation between settlers and Aboriginal people increased. European encroachment was extending across the open central plains that centuries of careful land management by Aboriginal people had created. The Aboriginal peoples were engaged in a guerrilla campaign to protect their land and resources, and to survive in their homelands. In 1828 Arthur declared martial law and banned Aboriginal people from entering the ‘settled areas.’ In 1830 he instigated the ‘Black Line’, with the aim of forcing the remaining Aboriginal people onto the Tasman Peninsula where he believed they could be readily contained.

Over 500 soldiers and at least 2000 field police and other civilians were involved in the campaign. This required an extraordinary level of planning and resources. Oatlands, the central outpost in the Midlands, was established as the major distribution centre where soldiers and civilians could be assembled and stores of food accumulated and distributed. The Line stretched across the parts of the island that had been ‘settled’ by Europeans between Lake Sorell in the Central Highlands and Campbell Town in the Midlands. It moved southeastwards ostensibly pushing the remaining Aboriginal peoples before it. On the surface the campaign was not successful – only a young boy and an old man were reported as being taken, and two Aboriginal people are reported to have been killed. However, the campaign revealed to the Aboriginal people the force of arms that could be brought against them if they tried to remain on their homelands.