Home / Visitors / Visitor Attractions / Shadows of the Past / Horse & Rider 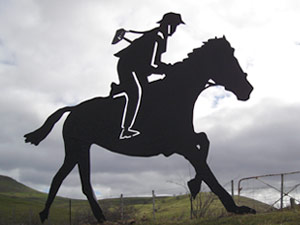 Can you see the rider racing up the highway carrying a mailbag? He is a messenger employed to deliver letters and small packages to the settlers. He could be James White, a stonemason accused of housebreaking and transported as punishment in 1831. Convicts weren’t locked in prisons very much in the early days of the colony. They were the workers who made the colony function. White was entrusted with the job of postal messenger from 1834 to 1836.

In the early days of European settlement, Van Diemen’s Land had no formal mail delivery service. Letters and parcels were delivered by whatever means was available at the time. Until the 1820s there were in fact few horses in the colony due to the long journey from England and the time needed for breeding programs to build up the numbers. Horses imported from Sydney were extremely expensive. The primary form of transport for most people was “shank’s pony” (walking).

With the growing demand for good communication as settlers moved further away from the major population centres, the colony was ready for an official government-operated mail delivery service and, in the 1820s, it had the horses to make it possible. Charges were set by the government and published in the newspapers. The cost of sending a letter between Hobart and Launceston was one shilling, a considerable sum. The mail was carried on horseback restricting the size of parcels that could be accepted. Most significantly, the messengers were convicts, so the newspaper notices made it very clear that messengers were strictly forbidden to leave the highway. Therefore, anyone living away from the road needed to arrange a drop-off point at an inn or house along the way.

The quality and treatment of the post-horses was a matter of ongoing concern and debate. The Superintendent of the Convict Establishment thought that the duties required of the post-horses were severe. The regular post-horse, Tommy, was often required to carry too heavy a weight in relation to the distance and the time allowed to cover it. The Civil Engineer John Lee Archer protested about the condition of the animals on their return to the government stables. He claimed that convict messengers failed to give the horses proper care and attention.

On top of this there was mounting concern about the behaviour of the convict messengers. By 1834, convicts messengers were being replaced by ticket-of-leave men. James White was one of the last convicts to hold the position. He had been nominated for the job by Clerk of Council John Montagu who vouched for White on the grounds that he was of ‘extreme good conduct’.

In 1838, Lieutenant Governor Franklin, responding to criticisms about the unreliability of the postal service, phased out convicts messengers and replaced them with private contractors. This created new opportunities for stagecoach operators to expand their increasingly essential businesses.

James White was a stonemason from Surrey in England who was convicted of house breaking and transported from England for life. He arrived in Van Diemen’s Land on the William Glen Anderson in 1831 and three years later was assigned to the post office as a convict messenger. He eventually received a conditional pardon on 1 July 1842.