Home / Visitors / Visitor Attractions / Shadows of the Past / The chain gang 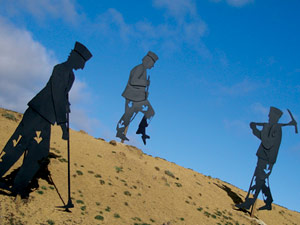 There was a lot to do to build the colony of Van Diemen’s Land. Convicts with skills were in high demand and were often assigned to wealthy landowners and treated quite well. Convicts without special skills were relegated to road gangs. Doing time with the notorious chain gang was not a normal experience for convicts. The chain gang was an 1826 colonial innovation designed to break the spirit of those who were insolent or questioned authority. Men were made to break rocks and dig ditches with their ankles chained together. The greater the punishment, the shorter was the chain. The pain was excruciating. The threat of the chain gang helped to keep the convicts in line.

In the penal settlement of Van Diemen’s Land, the reality for most convicts did not conform to today’s stereotyped images of men in broad-arrow stamped clothes, dragging a ball and chain, working on road gangs and receiving lashes. Whilst this was the experience of some, the overwhelming majority of convicts were assigned to work for landowners who had been granted land across the island. The arrows on clothes simply meant government-issue. Their rations were generous and many married or settled down and raised families. There were no bars on their windows; they lived in cottages, not cells.

The colonial labour market was reliant on the skills of the convicts. Carpenters, masons, bricklayers, mechanics, blacksmiths, sawyers, wheelwrights and coopers were particularly valued. Their masters’ reliance on their practical abilities gave skilled convicts more power in the bargain for indulgences. Minor transgressions, such as drunkenness, were often tolerated for fear that the magistrate would reassign the accused convict to another property.

Convicts with no skills were relegated to the work gangs, building the roads and bridges that connected the settlements that were being established across the island.

Where the stereotypical image of the convict did hold true was on the chain gang. The penal system in the early 1820s was based on the belief that harsh punishment was the key to reforming the criminal classes. In 1826, under Lieutenant-Governor Arthur’s authority, the chain gang was trialed as a punishment. It was invented especially for convicts and men with tickets-of-leave who dared to be insolent or question authority. The method was found to be effective in curbing recalcitrant behaviour and became an integral part of the punishment system. Soldiers, rather than convict overseers, guarded the men on the chain gangs. ‘Never were men better worked, better flogged and better managed that they were in the gang’.