Home / Visitors / Visitor Attractions / Shadows of the Past / The Stage Coach 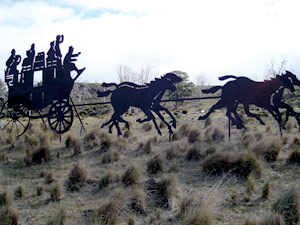 We might like to think of travel in the 1800s as a sedate and dignified affair. In fact, it was fast and furious. Coach stations where horses were changed were built every few miles. People and mail were carried at considerable speed and accidents were not uncommon. There was a lot of money to be made and competition was considerable.

Stage-coaches pulled by teams of horses were the primary mode of public transport in early Tasmania. The ‘stage’ refers to the need to divide the journey up into stages, or sections that one team of horses could undertake before they needed to be rested. This was a distance of about ten miles (16kms). This explains why townships and coach houses were built regularly along the Midlands Highway between Hobart Town and Launceston.

Considerable money could be made operating coaches on the fifteen-hour journey from one end of the island to the other. The most successful operators were John Cox and his wife Mary Ann, and Samuel Page and his wife Grace.  Competition was fierce, and the drivers at times became reckless in their quest to be the fastest on the route.

The stagecoach industry contributed significantly to the prosperity of the towns along the Highway especially Oatlands. As well as providing employment for many caterers and accommodation providers, the business kept many grooms, ostlers and stable-hands, harness-makers and blacksmiths occupied. Tradesmen such as saddlers, wheelwrights, coachbuilders and whip-makers also owed much of their business to stagecoach operations. The last coach to travel the Highway did so on 31 October 1876, the year the steam train connected Hobart to the north of the island.

One of the most successful coaching operators was Samuel Page who operated from Oatlands from the 1830s. He had seven coaches and around 150 horses that carried both passengers and the mail; and became a very wealthy man in the process.

Samuel Page and his wife Grace moved from Hobart to Oatlands in 1837 and ran the Oatlands Hotel. The hotel catered for the many travellers who came through the township on foot, horseback, bullock wagons and in gigs. At the time there were four coach owners vying for trade on the road between Hobart Town and Launceston.

The first coaching service between Hobart and Launceston in 1832 had been owned by John Cox who was the proprietor of Macquarie Hotel in Hobart, the York and the Albany at Oatlands, and the Cornwall at Launceston.

The first trips took three days to cover the 120 miles (193 km) and a fare cost £5. As roads improved, a four-horse stagecoach replaced the tandem team, travelling twice a week and carrying mail under a government contract which was extremely lucrative. When Cox died in 1837 his widow successfully took over the running of the business and within ten years was operating seven daily and four nightly coaches a week from each centre. In 1849 she sold her seven coaches, 150 horses and 24 sets of four-horse harness to Samuel Page. In 1853 Page took over the mail contract. With three coaches daily each way, the service controlled most of the transport on the main road and required 300 horses and three main fodder stations. Fares ranged from 5/- (five shillings), for outside seats, to £5 (five pounds) inside.

During his coaching operations Page acquired many pastoral properties, including Thomas Anstey’s property, Anstey Barton. At one time his landholdings and his flocks comprising 63,000 sheep were said to be the largest ever held by one person in the colony. Page was also an enthusiastic breeder of race-horses and helped to found the Tasmanian Racing Club in Hobart.