Home / Visitors / Visitor Attractions / Shadows of the Past / The bushranger

The bushranger, south of Oatlands

The price of freedom! 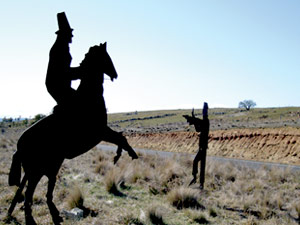 A number of convicts chose to be bushrangers because it was better than the chain gang and the land provided them with food and shelter and a sense of freedom - but freedom was often short lived. Convicts took advantage of the rewards and pardons offered for hunting down bushrangers. By capturing or killing bushrangers, convicts could gain their own ticket to freedom.

Relatively few convicts were under constant lock and key in Van Diemen’s Land, and some were given guns and dogs to hunt kangaroo and emu for their masters. Rather than suffer the hard life and contend with the authority of their masters, some convicts preferred to go it alone, living on their wits and what they could gather from the land, learning from the Aborigines or stealing from the settlers. Those who did best formed alliances with local Aboriginal people and indeed with European settlers who turned a blind eye to their illegal activities.

It was not the deliberate violence that bushrangers craved but independence. The same went for those convicts who informed on bushrangers or were instrumental in their capture. Bushranging and bounty hunting came from the same source – the desire for personal freedom.

Richard Lemon formed the first organized gang of bushrangers in 1805. By the second decade of settlement, however, bushrangers had virtually taken over the interior of the island. This prompted Lieutenant-Governor Davey to declare martial law in 1815. Not that this was successful. For example, the Midlands remained the haunt of such notorious bushrangers as Michael Howe (killed in 1818) and Matthew Brady (captured and hanged in 1826).

Michael Howe, referred to as ‘Governor of the Woods’, virtually held the settlers of the Midlands to ransom. He gained his power through his alliances with some wealthy and influential landowners and with local Aboriginal people through his partner who was known to the settlers as ‘Mary Cockerill’ or ‘Black Mary’. He embodied the myth that there was a life of freedom to be had in the bush of Van Diemen’s Land and was a hero to convicts and ticket-of-leavers who could imagine a better life. Howe’s life ended inevitably and violently at the hands of two convict bounty hunters assisted by Private William Pugh of the 48th Regiment.

Bushranging was not curbed until the late 1840s, with Martin Cash, Lawrence Kavanagh and George Jones among the last of their kind. Interestingly, Cash returned to Van Diemen’s Land after a period on Norfolk Island and became a police constable. He was one of the few bushranger who lived to a ripe old age.