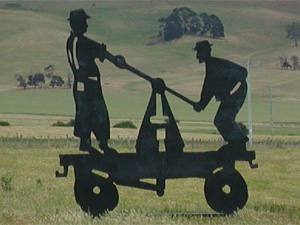 This line was one of a group of lines in the south of Tasmania approved for construction in the early 1880s to complement the then privately owned Main Line. Construction commenced in 1888, and the line was officially opened for traffic by the Tasmanian Government Railway on April 22 1891.

Also known as Green Ponds Line (Kempton). The line started at Brighton station , just on the Hobart side of the Jordan River, before crossing the river on its own bridge (parallel to the then Main Line railway bridge) and then generally following the river to Pontville. Between Pontville and Bagdad, and Kempton and Melton Mowbray, the line ran along a similar alignment to the current highway. From Melton Mowbray to Apsley., the route paralleled the current main roads with the exception of going around the other side of Nannygoat Hilll. Between Bagdad and Kempton, the line winds its way around the hills and next valley to the west of the current highway.