Home / Visitors / Visitor Attractions / Shadows of the Past / Policeman with drunk 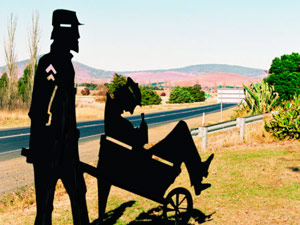 Alcohol was one of the biggest social problems in the colonies of New South Wales and Van Diemen’s Land. It was supplied from government stores according to strict rationing guidelines, which meant that who you were determined the amount you got. Of course there was illegal home-made liquor, and a brew from cider gum that settlers learned about from Aboriginal people. No doubt many wanted to forget the hardships of life in the colony, and that they were such a long way from home with never a chance of returning. As the colony’s police constables often had to work more or less alone, the Government issued wheelbarrows for carting off inebriated offenders to the cells. Here in Melton Mowbray the cells were behind the police cottage, which was near where the hotel is today.

Using wheelbarrows to cart away drunks was an official mode of transportation in New South Wales from 1837 onwards. The Government provided police with this equipment to help them transport intoxicated members of the public. This was not always as straightforward as it might sound. In 1838 the Sydney Gazette reported that a constable carting a drunkard off to the lock-up was in fact intoxicated himself. Rather than wheeling the man to the nearest watchhouse, as was the usual practice, he instead ‘wheeled him over half of Sydney’. The poor fellow was thrown out onto the road on more than one occasion ‘to the mirth of the citizens’ and the gratification of the man’s drunken captor.

As in Sydney, wheelbarrows were used in Launceston, Hobart, and other towns like Melton Mowbray to convey drunks to the cells. Several intriguing stories have survived that provide some insights into this practice.

One story goes that when he was brought before the Supreme Court of Van Diemen’s Land on 24 January 1837, on a charge of having horsewhipped a man in a public street, the defendant Gregson’s character was called into question. Accused of being a drunkard, Gregson was quick to deny that he had ever ‘been wheeled about the streets of Launceston in a wheelbarrow in a beastly state of intoxication’. While Gregson may never have enjoyed such ignominy, his court evidence demonstrates that this practice was in use in Van Diemen’s Land.

Well-known colonial identity and diarist George Boyes, the Colonial Auditor of Van Diemen’s Land, experienced trouble with a string of drunken servants - and it was not only men who were found drunk and wheeled away in the local constabulary’s wheelbarrow! Amongst the incidents recalled in his diary is the following account:

At about 11 o’clock there was a tremendous uproar in the kitchen. A young woman [convict servant] not long in the Colony and only about a month from that wholesale abstergent of vice the “Anson” had become most heroically drunk. Braving all the authorities, the Police in particular, there she was … Screaming, dancing, howling and insulting a poor little constable who had made his appearance with a musket to lead her away. … I was obliged to send for more assistance but it was upwards of two hours before they reached the watch house. They were obliged to lash her in a wheelbarrow and while in transition the whole welkin (heavens/sky) rang with her shrieks and imprecations.