Cows in the Lake Sculptures

Today (17th July 2018) the ‘Cows’ were launched into Lake Dulverton, Oatlands  as a precursor to the forth coming Heritage & Bullock Festival being held in Oatlands on the weekend of the 11th & 12th August 2018.  The artwork was initiated by the Southern Midlands Arts Advisory Committee in association with the Lake Dulverton Callington Park Committee.  The installation will be officially opened during the Festival.

Today (17th July 2018) the ‘Cows’ were launched into Lake Dulverton, Oatlands  as a precursor to the forth coming Heritage & Bullock Festival being held in Oatlands on the weekend of the 11th & 12th August 2018.  The artwork was initiated by the Southern Midlands Arts Advisory Committee in association with the Lake Dulverton Callington Park Committee.  The installation will be officially opened during the Festival.

The Cows in the Lake sculpture represents a bygone era of Oatlands, local resident, Don Fish recalls first seeing the cows in the lake while attending the former Oatlands Primary School (now Roche Hall on the High Street) during the late 1940s, early 1950s; a time when village residents would pay 10 shillings per year to the Council to enable their milking cows, usually a Jersey Cross, to roam the back streets of Oatlands.  A Council registration tag was fitted to a collar worn around the cow’s neck to show that the cow had the right to roam the village.

The cows would graze on the grassy verges during the day, this roaming extended to entering Lake Dulverton in search of the native grasses which grow there still today.

Fifteen to twenty cows would enter the lake after grazing the verges, near disappearing until their hooves were barley touching the bottom of the lake, with only the top of their rump, shoulders and head visible as the cows would eat the native grasses.   When school finished at the end of the day, the children whose parents owned a cows roaming the village would find the cow, tether her up and return her home to be milked. The cows would be kept in the home yard overnight, the next morning they were milked before being let back out to the streets to roam once again.

This is a story that is reminiscent of the bush poets Henry Lawson or Andrew Barton ‘Banjo’ Paterson, relating to Australian rural life in a bygone error.  One can only imagine how they would have crafted stories and poetry around this Oatlands tale.

Maria Weeding from the historic property ‘Weedington’ which fronts Lake Dulverton stated that the Hereford cattle from ‘Weedington’ also dined on the native grasses in the lake up until the early 1980s.

The sculpture Cows in the Lake created by Kooper Tasmania represents a time in Oatlands, when cows roamed and grazed the village street verges and then systematically through the day made their way into Lake Dulverton in search of nourishing native grasses.

Project Manager, Andrew Benson stated that the project had been a great community collaboration, starting from Don Fish’s story, Stephanie Burbury from the Oatlands District Historic Society provided some initial research, Simon Blight and Alan Townsend from Council’s Heritage Projects business unit provided further research, Chairman of the Southern Midlands Arts Advisory Committee, Clr Edwin Batt and his Committee had faith in the artistic merits of the project & supported it through the formal Council processes, the Lake Dulverton & Callington Park Committee of Council supported the project and saw the relevance of the sculptures in the Lake, the Principal of the Kempton Primary School, MaryAnne Picone and the students from the school allowed their school mascot ‘Daisy’ to be the model for artist Folko Kooper to use as the basis of his creation of the three cows in the Lake, then finally Council’s Manager Infrastructure & Works, Jack Lyall plus Works Supervisor Paul Lang and their team of Council field workforce who actually installed the three cows in the Lake under the supervision of the Artist, Folko Kooper.   Thanks goes to the Mayor, Tony Bisdee OAM and the Council for investing in this interesting part of the Oatlands story, also to all of those contributors who have made this project possible.

The Sculpture of the three cows is located in Lake Dulverton and can be seen from High Street Oatlands, adjacent to the Oatlands District Historical Society museum.  An interpretation panel will be installed prior to the official dedication ceremony during the Heritage & Bullock Festival in Oatlands on the 11th & 12th August 2018.

About the Artist
Kooper Tasmania is a creative partnership between Folko Kooper and Maureen Craig of ‘Oakwood’ in the Southern Midlands. Focusing on garden sculpture and water features as well as public art, they specialise in limited ranges and one-off pieces. Their work incorporates corten/mild steel, glass, bronze, stainless steel and stone. 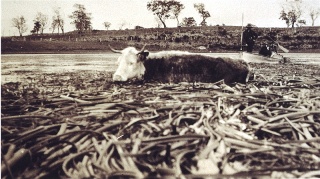 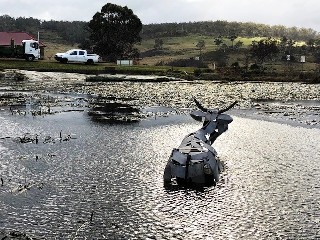 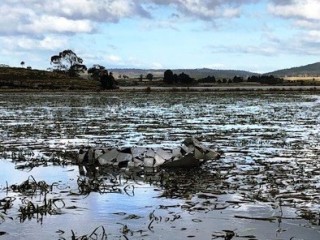 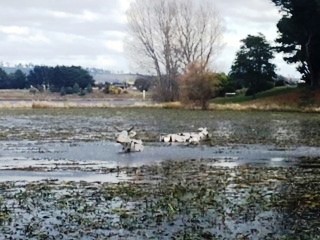 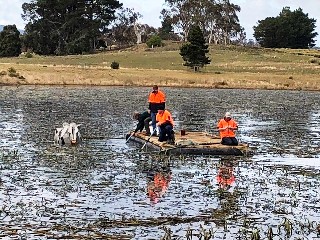 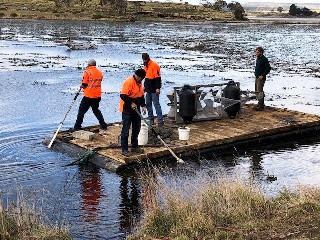 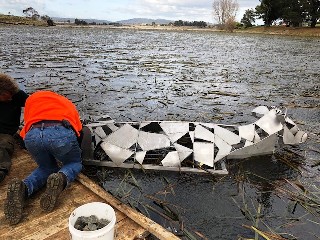