Home / Visitors / Visitor Attractions / Shadows of the Past / A professional hangman

Someone had to do it! 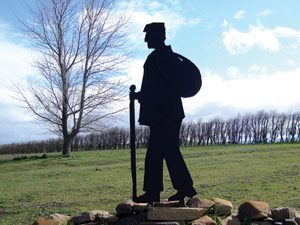 Being the hangman was a reviled and feared profession, but it was essential to the convict system. Those willing to take on the gruesome task could expect rewards for service.

Hangman Solomon Blay took his job seriously, taking care to dispatch his ‘clients’ quickly and efficiently. Hanging was a frightening punishment which was used to control the population.

The threat of the ultimate punishment – being hanged by the neck until dead – was a key part of maintaining law and order in the colony of Van Diemen’s Land.  Until the middle of the 1800s hangings were carried out in public and attracted large crowds. Execution was supposed to act as a deterrent. While in Britain hangings were often more like carnivals, in the colonies the crowd would often sing in solidarity with the condemned as they met their end.

In Lieutenant-Governor Arthur’s term of office in Van Diemen’s Land there were two hundred and sixty hangings; of these, one hundred and three occurred in 1826-7 alone. Arthur knew that it was not dying, but the desecration of the body after death, that inspired fear and dread in the popular mind. Bodies were sometimes left in the open for months providing food for carrion-eaters.

Most executions were for crimes against property, in particular theft of livestock as it posed a threat to the colony’s early economy. Such punishment was not only meted out to convicts and bushrangers. Among those hanged for theft of livestock were also free people with their own land holdings.

Solomon Blay was perhaps the colony’s most remembered hangman. Blay held the position for fifty years from 1840, barring a couple of years when he tried to retire. Blay has been described as a murderous man who killed children and was shunned by all. This was far from the truth. It would seem that Blay took pride in his job and was good at it. Where others were described as torturers, Blay had the ability to efficiently dispatch his charges after calmly shaking their hands. In all, he executed 205 people.

The modern expression ‘gala’ is derived from the Anglo-Saxon for ‘gallows day’.

Solomon Blay was transported to Van Diemen’s Land for counterfeiting in 1837 when he was 21 years old. Once here, he used his background in boating to gain respect, and by the following year he had been given a position as police constable in Brighton.

He had problems with alcohol which contributed to a stint with a chain gang, from which he unsuccessfully tried to escape. His agreement to become hangman in 1840 afforded him a degree of physical comfort and eventually a regular salary. Blay worked between Hobart, Oatlands and Launceston. He eventually settled in Oatlands from 1846 until 1868. From there he carried out his duties at the gaol and throughout the colony. He endeavoured to change career but despite attempts to settle in Melbourne and in England, Blay and his wife returned in 1870 to what was, by then, Tasmania. Here Blay felt more at home and less persecuted, and he regained his position as executioner in Hobart. Blay finally retired as executioner in 1891. He fell increasingly under the influence of alcohol and died in 1897.