Coach Design and Practice The first coaches were built in England and the services were conducted on English lines. A bugle call gave warning of approach and the names of the vehicles “William the Fourth”, “Queen Charlotte”, “The Victory” — as well as the inns that were the starting points — “The White Horse Tavern”, “The Royal Oak”, “London Tavern”; these names show how the first settlers clung to memories of their native land.

By the 1830s coaches were being built in Sydney. In construction, they followed English design, with metal-bound wheels and steel springs. Leather springs were an American innovation, introduced at a later date. The vehicles usually carried seven, eight, or nine passengers and were as a rule drawn by four horses.

Development to the Inland

In Tasmania coach services began to develop in the 1830s. By 1846 coaches were running from Hobart to Launceston and from Hobart to Brown’s River, New Norfolk and Green Ponds (Kempton). There were also services from Launceston to Longford (the “Original Comet”), Westbury (the “Morning Star”), Perth and Evandale.

Kempton as a Coaching Village

Re-living the Past - Kempton Festival February 2009 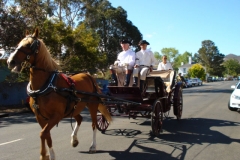 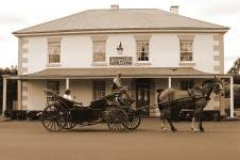